Redharvest: A salute to South Africa's 'munition factories' of WWI 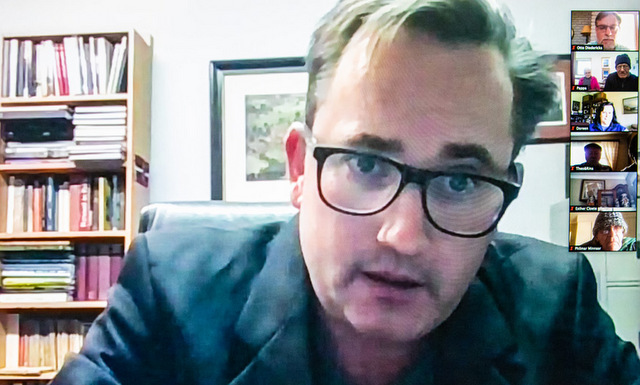 Under the heading ‘Redharvest: A Salute to South Africa’s “munition factories” of the Great War (1914-1918)’, Matthew Marwick outlined the contribution of young English-speaking South African men. Many who died had been pupils from private schools like Maritzburg College that Matthew attended and where he teaches History.

Matthew was inspired to undertake this research by the school’s monument for 100 old-boys and three teachers who were among the fallen. Moreover, the “father” of Maritzburg College RD Clark’s own son was one of those.

The phrase “munitions factories” is attributed to an erstwhile headmaster of St Andrews, PWH Kettlewell, who felt it was unseemly to compare such rolls of honour. Still, Matthew’s database is quite revealing: six of the most prominent schools each lost between 86 and 164 old-boys. Of a total of 8 551 South Africans who perished in the Great War, more than 1 300 were from 17 schools. Several received high honours, such as the Victoria Cross.

This talk via a Zoom meeting prompted questions from our predominantly Afrikaans-speaking audience about the role of honour and duty, specifically towards “King and Country” – which Afrikaners resisted for political reasons.