We live through history daily – and eventually it all becomes part of our own personal history. The world is changing so rapidly that those memories of our childhood years already elicit amazement in today’s young people: evenings without TV, using a ‘tickey box’ to phone someone, church services under a big tree during holidays at the seaside …  Genealogy demands that we also pen our own stories with which to walk others down our own memory lane.

Navigate to the presentation video, text or slide set. Each presentation is in the language of the topic. View below the English summaries of stories as told by our branch members. 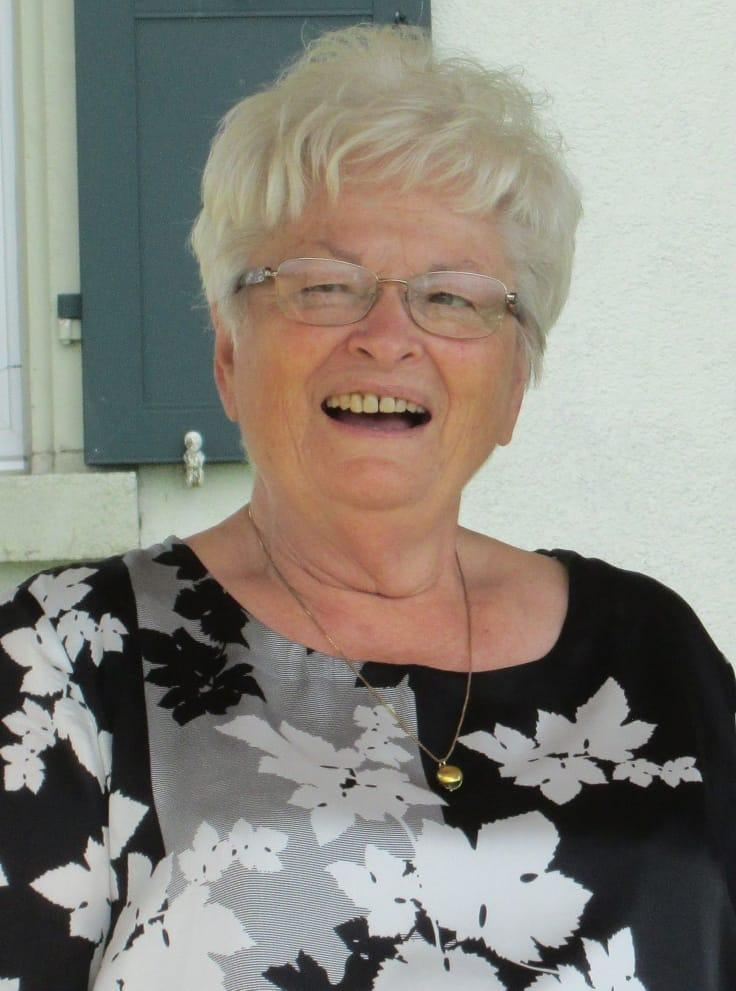 Neëltjie Zehnder says she knows one's memory is unreliable when it comes to historiography; therefore, she writes down her memories. Born in 1943 in Heidelberg in the Transvaal, she was named after her maternal grandmother.

The school on Schaapplaats (Dutch form of the name) was a one-room corrugated-iron building without running water, with a stove that only properly heated up after the worst morning cold had already subsided. They took a 'trêppie' (horsedrawn cart) to school. Her first teacher, originally from the Cape, sent them home as soon as heavy weather built up, for which he was apparently afraid.

Her parents were very poor, but were later able to buy a piece of land, Skaapplaas, which her father partly cultivated with an uncle. He farmed with maize and later purchased a Munktell tractor. Both parents were hardworking and served the community, including the Landbou-unie (agricultural union) and the church. They also treated the farm workers well. She and her siblings used to play with the children and also acquired Sotho names.

Eventually, an opening emerged from the cocoon of carefree barefoot days on the farm. She went on to university to study and later married a Swiss man. 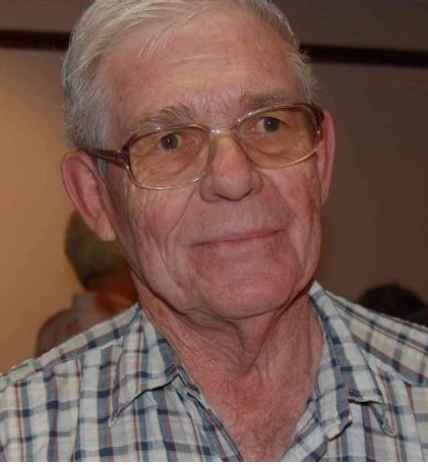 Nic's primary school years lasted from 1947 to 1953. Most of the 120 children were boarders at the school, which was initially self-sufficient. There were dairy cows, chickens, pigs and a vegetable garden.

With his parents' home 35 km from the school, the children gathered there to be taken to school. They had to go through 21 gates, the so-called "smoelslaners" (mouth beaters) that would catch many drivers offguard. On one occasion, they were delayed for hours by floodwaters and arrived late at school, all the children covered in mud.

The children were taken by truck one time to see the circus at Waterpoort, about 40 km from Alldays. The truck was again commandeered for an athletics meet at Louis Trichardt, where Nic was told to also run the 200 yards for which they had not even trained. He cannot recall how he fared at the finish line.

During a school trip to the Bosveldhotel, a mineral spring resort, he suffered severe sunburn with his back covered in blisters. He could not stand a shirt near his body and endured pain for a week.

Snippets from my childhood 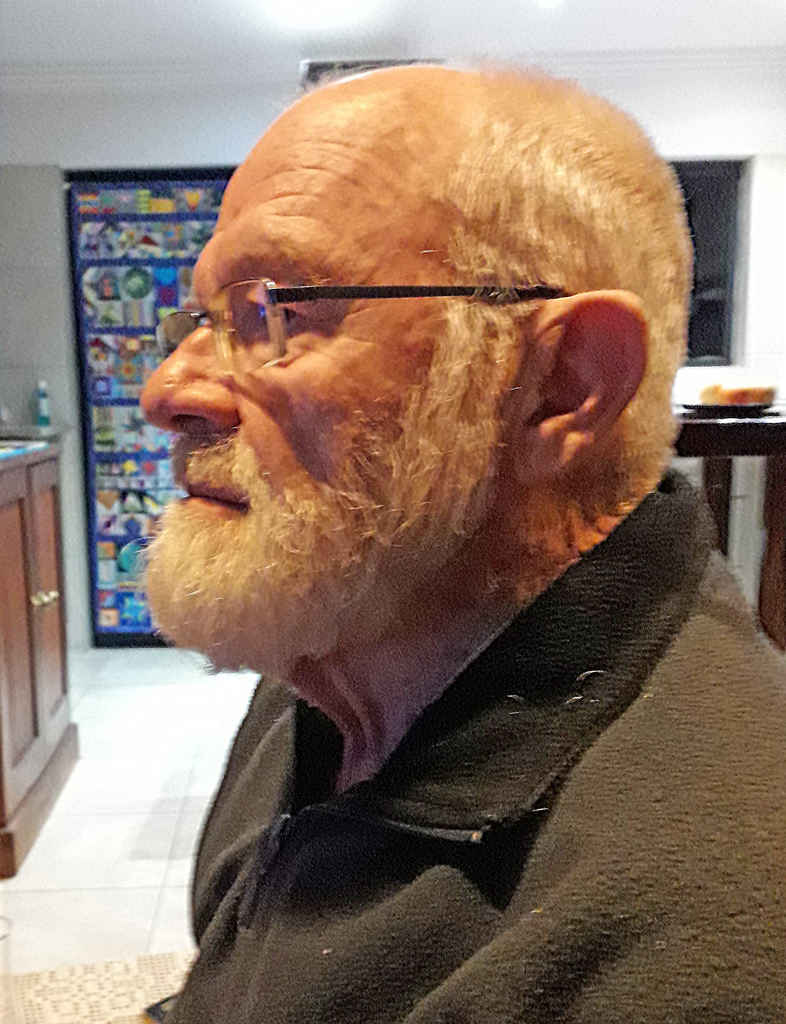 Vis writes that he was christened in Pretoria just days after the outbreak of World War II. As a railwayman, his father was later transferred to Zeerust, where Vis recently had the opportunity to once again see the impressive station building again.

When his father was on duty on a Sunday, the kids could play with the porter trolleys on the platform. In summer, they escaped from the heat by going into the cold room after school. The Railways provided employment to many people. His father was transferred to the Reef in 1949. The office did not have telephones in those years; only a telegraph with which messages were sent in Morse code.

In the gravel pit behind their house he could hunt frogs with a catapult and they also went fishing in the nearby stream. His mother then fried the 'ghieliemientjies' for him. Grandpa and Grandma Visagie often came to visit by train; the old man liked to tell anecdotes from the 'English War'.

Vis's life changed irrevocably when he was confronted by the English language at school in 1950 where he had to wear shoes and a tie.

A Time of Innocence 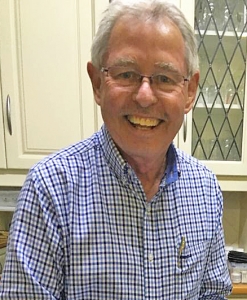 A clothes hanger from Springs Outfitters dating from the 1950s on which he still hangs his jackets to this day, reminded Sam of his childhood years in that East Rand town. He and three brothers grew up on the Daggafontein mine where their father was the principal of the state mining school.

Although the celebrated writer Nadine Gordimer, also a native of Springs, in later years wrote snidely about mining life, for Sam it was rather great fun. He also loved the bioscope in Springs, which required a journey by train. Winter holidays saw the family travelling in a small DKW Auto Union motorcar to Badplaas, the preferred holiday resort many Afrikaans speaking families in those years. They also visited his mother's relatives in the Karoo, whose family connection he was only able to determine in later years.

Sam loved reading, although there were few books in their home, perhaps due to the family's meager finances. Nevertheless, he saved for his first camera and thus made photography a hobby that he still practices.

Beautiful memories of our times at Volmoed and Hopedale 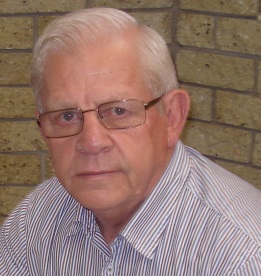 As the eldest of three boys, Oosie grew up in the Somerset East region in present Eastern Cape province. For them, Cradock was far, Graaff-Reinet even further and Oudtshoorn almost unreachable. The family did have cars and pickups, but flat tyres on the dirt roads made long journeys no fun.

He spent his childhood years on Volmoed belonging to the Oosthuizen family and on Hopedale of the Fouries where his mother grew up. His dad’s brother Ollie married mother Susie's older sister Esther. The adjoining farms were located on the banks of the Great Fish River.

Around the house on Volmoed was open ground with thorn trees that provided a lovely playground. They built roads, kraals and cultivated land in the sand, and “dolosse” and glass bottles were their livestock. He remembers the old house with the delicious smells of homemade bakes and farm food. Family gatherings on Sundays and Christmas were special. In 2014 on a visit there, he found the house was nicely renovated and preparations were underway to plant citrus orchards. Today he looks back on a wonderful childhood. 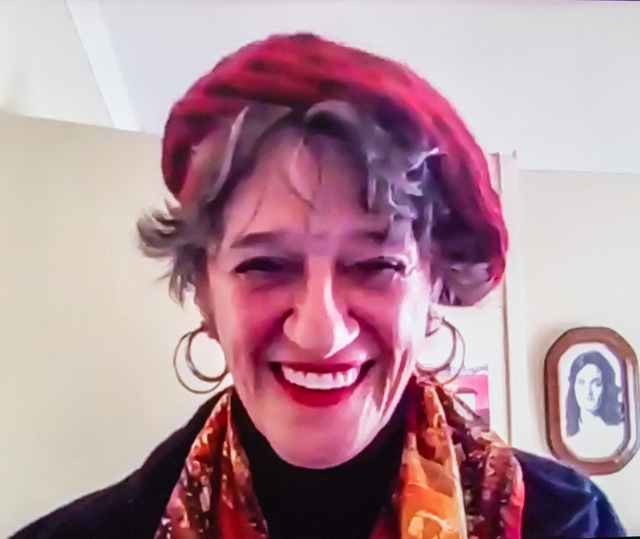 Of the bitterly cold Wakkerstroom where Rentia's father was a teacher, she has fond memories of the smallholding where she grew up, as well as the school that she found even “more enjoyable”. Here she played hop-scotch and ‘five-stone’ (which developed their hand-eye coordination). There was "manna" to look for under the eucalyptus trees to eat, tadpoles to catch between the reeds and the planting of moss gardens.

During short break Rentia had time to eat Mom's sandwiches, while during long break when games were organised, she preferred to play 'rounders' rather than basketball. In winter, she and her friends used to slide on an open cardboard box down a slope or did a balancing act on a rusty pole to cross the dry water ditch - an exercise that is apparently given to children with dyslexia today.

Although many rural villages lacked reading material, Rentia received the ‘Jongspan’ and ‘Patrys’ magazines in the post, and also read the Transvaler newspaper a day or so late. For the children, it was exciting to get books from the provincial book truck that came to supply the library. It was open Friday mornings and Tuesday afternoons, and she quickly finished reading one of the two allowed books to take out another one before closing time.

Rentia believes the greatest gift was to be able to just be a child. 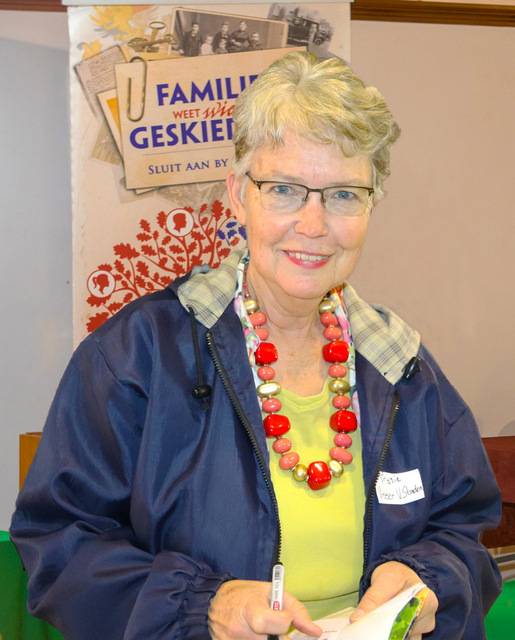 In 1972 Trysie noticed by a newspaper supplement on the training of women in the SA Police, which encouraged her to make it a career. In this narrative, she enthusiastically elaborates on the initial basic training that had virtually a military character with strict discipline. They had to learn to march, were exposed to teargas (albeit equipped with a gas mask) and learned to handle and safely shoot a pistol.

After these basics, they received further training in crime investigation, legal subjects, disaster management, first aid and self-defence. Her passing out included an impressive parade. Trysie was later one of a handful of women who completed a detective course and served in various parts. She is clearly proud of her police career - which was just too brief. 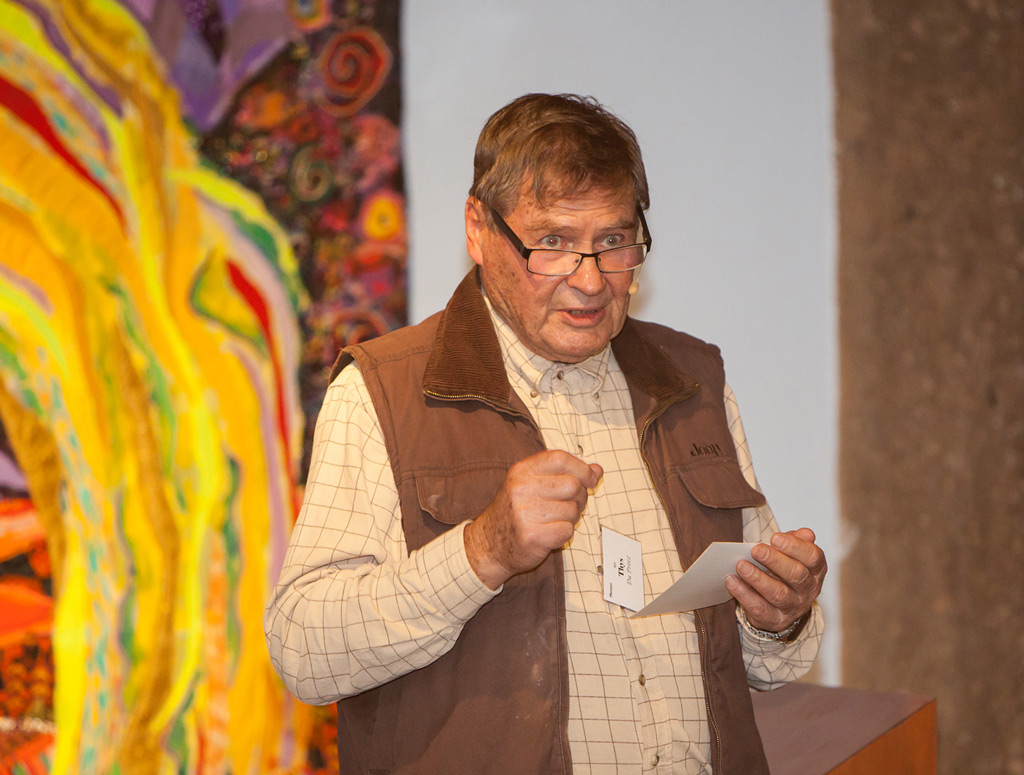 In his fullsome written contribution on his youth, Thys recounts how he grew up in the country, partly in a secluded community atop the Piketberg mountain in clean air and surrounded by beautiful scenery.

His father was a primary school teacher who was requested by the education department in 1937 to fix the school there because it did not perform well. The school was later named after him. In those years they were still taught the "stupid" Imperial system of pounds, shillings and pennies. The British royal family's visit in 1947 made little difference to them; they were "not exactly lovers of kings who also spoke English." He was a great lover of Tarzan books.

Thys later went on to study at Stellenbosch University, making sure he "passed safely" every year, because his father had cautioned him that they did not have money to waste. He later went to Ikeys for postgraduate studies and later to Tukkies to complete an Masters degree. Yet Thys believes that as one who had a lifelong sense for the comic, he may never have truly outgrown his youth.

My years as young maternity nurse 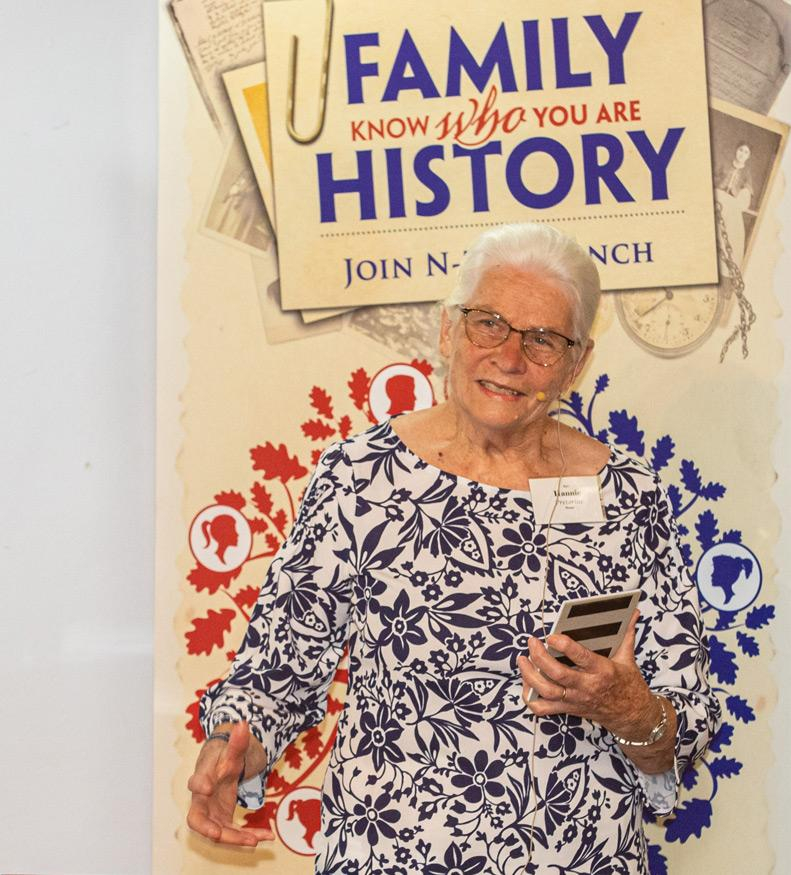 The first speaker in our new Memory Lane feature was Hannie Pretorius. In a short and witty talk, she shared her experiences as young nursing student and later as a maternity nurse. In those days, diagnoses were made without today's modern apparatus. They did, however, have a fetoscope horn to monitor the baby's heart beat.

The first training of midwives in the Transvaal took place in the Kruger House in Church Street, where President Kruger's granddaughter, Mrs. Elsie Broekhuizen, made the home available for elementary maternity training. Subsequently, the Association for Afrikaans Mothers was established in 1919 that led to the establishment of the Moedersbond (‘Mothers' Union’). She concluded her talk with the message that life is precious and the birth of every baby very special.

Listen to Hannie's story in her own voice. Thanks to Neels Niesing who made the video recording of the talk.