The founding of the Genealogical Society of South Africa (GSSA) in 1964 was inspired by Philip Myburg, owner of the historic farm Joostenberg near Stellenbosch. (An earlier entity, the South African Genealogical Association, established in 1939 under the leadership of Prof. S. Engelbrecht, was dissolved at the outbreak of the Second World War.)

With a keen interest in family research, Myburg invited eight like-minded and eminent individuals who had the foresight to decide on the establishment of a South African genealogical society, which subsequently came into being on 17 June 1964 in Cape Town. 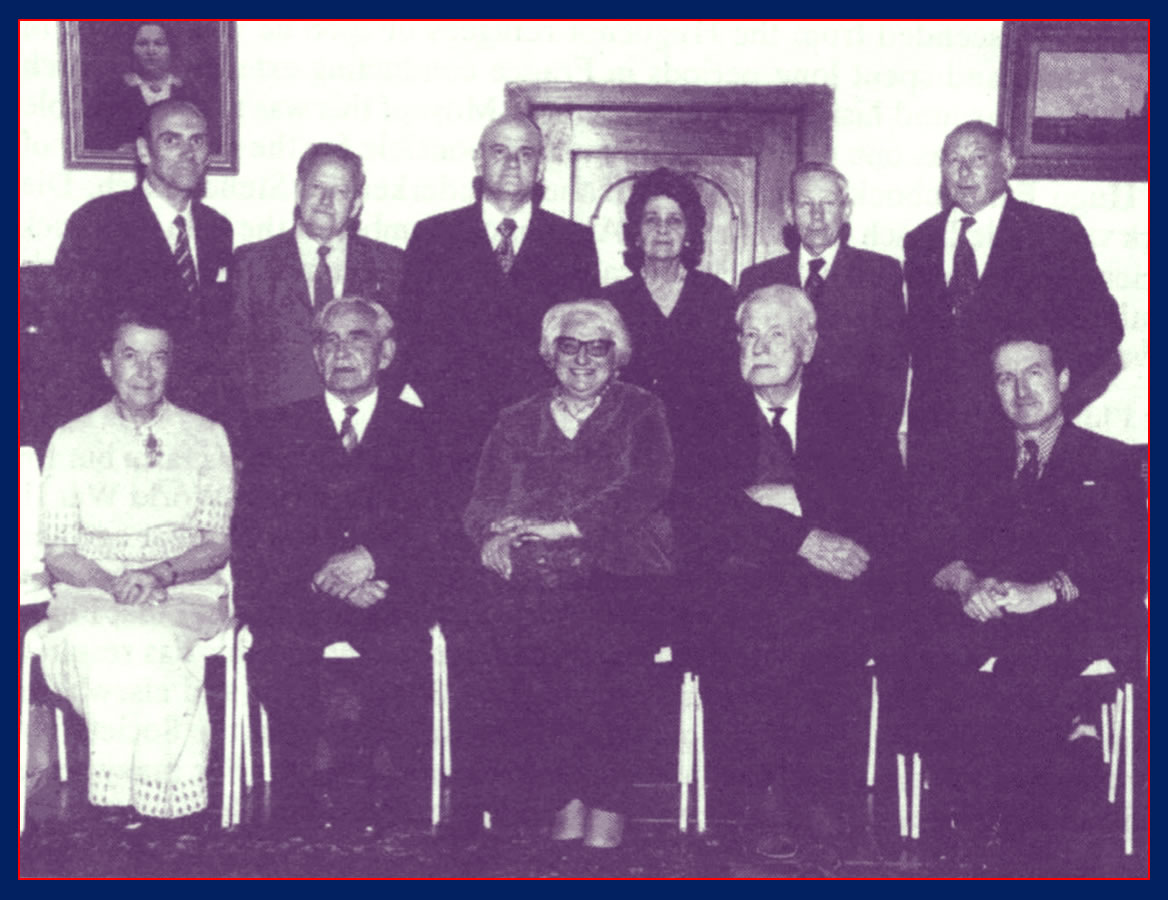 Born of Dutch parents, Anna Böeseken was a prolific writer and editor who contributed much to the archives service. Her knowledge of early Nederlands and its script has always been of great assistance to genealogical and other researchers. Among her valuable privately published works is a study on Jan van Riebeeck. A graduate of the universities of both Cape Town and Stellenbosch, from which she received her doctorate, she was also awarded honorary doctorates by two other South African universities. As a founding member of the Genealogical Society of South Africa (GSSA) in 1964, she served on its board until 1986 when she was awarded honorary membership.

Universally known as Dr. Con, he lectured in Zoology at the University of Stellenbosch, his alma mater, for 36 years. As a scientist and author, his interests spanned folk music and song, drama and literature and genealogy on which he wrote in both English and Afrikaans. His publications on the De Villiers and Swart families bear testimony to the depth of his research. His essays on the people and places of the Overberg region, where he was born, are evocative of times gone for ever. He was a regular contributor to FAMILIA.

A graduate of the University of Stellenbosch where he obtained a D.Ed. degree, Dr. Heese was an educationalist who worked as both teacher and school principal in the Cape province. As a founding member of the GSSA, he served in the position of both secretary and treasurer for many years. After his retirement he devoted the remainder of his life to genealogy. His literary output included articles for FAMILIA and for the Human Sciences Research Council's Suid-Afrikaanse Biografiese Woordeboek (Dictionary of South African Biography), as well as comprehensive reference series, Suid-Afrikaanse Geslagsregisters (South African Genealogies). His most controversial book dealt with the origins of the Afrikaner (Die Herkoms van die Afrikaner). In 1982 the South African Academy of Science and Arts awarded him the prestigious DF du Toit Malherbe Prize for genealogical research.

A journalist and editor, Louis Hiemstra devoted almost his entire career in service with the influential media group Nasionale Pers. He started as a young journalist on the Volksblad newspaper and later joined Die Burger in Cape Town, where he was language editor. His most important achievement was on the compilation of the new Tweetalige Woordeboek (bilingual dictionary) published by Tafelberg.

Upon completion of his theological studies at Stellenbosch in 1943, the Rev. Hopkins  served numerous congregations throughout the Cape Province, including Oudtshoorn where he also was attached to the military camp. After a similar position as chaplain at another camp at Wynberg in Cape Town, he became an archivist at the Dutch Reformed Church (DRC) archives in Cape Town. His genealogical expertise and knowledge of records were of inestimable value to other genealogists. His output included the histories of several DRC congregations and numerous article contributions to FAMILIA. He served as the first chairman of the newly formed GSSA in 1964.

Professor Hugo was head of the Department of Classics at the University of Cape Town. Descended from the Huguenot refugees of 1688, he was steeped in their history and spent long periods in France conducting extensive research. This found its way to articles he contributed to FAMILIA. It was André who suggested this name for GSSA's quarterly journal. Besides his involvement in the compilation of the Hugo Familieboek (published after his death), he was a council member of the Van Riebeeck Society where he was involved with the publication of several historic volumes.

Born on the family farm Joostenberg near Stellenbosch, Philip devoted his entire life to this farm but for a period of four years he spent as a prisoner-of-war in Italy and Germany during World War II. It was from his grandfather that Philip derived his love of genealogy from a young age. This prompted his hosting of the formative meeting of the Society in 1964, for which he served as first treasurer and later as chairman. Philip served on the board for many years and was also a regular contributor to FAMILIA.

The most prolific writer on genealogy and heraldry in South Africa, Dr. Pama was born in Rotterdam.  His entire life revolved around books, writing, research and publishing in the Netherlands, England and South Africa. His revision of the early De Villiers Geslagsregister and universally known as the 'De Villiers/Pama' brought genealogy into the homes of the ordinary individual. Books on local history have also come from his pen. A founding member of the Genealogical Society in 1964, he edited its journal FAMILIA for 28 years. Pama was heavily involved with the formation of South Africa's Bureau of Heraldry on whose board he served. He was also chairman of the Heraldry Society of South Africa.

Stellenbosch born Jan van der Bijl had a deep love for his birthplace and at his death bequeathed his home for use as a museum. A physicist by profession he studied at both Stellenbosch and Harvard in the United States, but spent his active career as a physicist at the University of the Orange Free State in Bloemfontein. Upon retirement he devoted his energy to genealogy and history, on which he published important work. A two-volume manuscript work on the grants and erven of Stellenbosch demonstrates his zeal to record the history of his home town. His genealogical publication on the Van der Bijl family from the progenitor who settled at Stellenbosch in 1680 is masterpiece of research.