An old book and new friends

Little did I know what would happen when I found a tattered little German bookletÂ amongÂ my deceased mother's effects. It was called Tlou! Tlou! Die ElephantensÃ¤nger von Botshabelo and was published in 1960, by the Mission Society of theÂ EvangelicalÂ Lutheran FreeÂ Church atÂ BleckmarÂ near Hanover, and written by Friedrich Dierks, my grandfather's successor at the Botshabelo Mission station on Putfontein Farm, district Lichtenburg.

The book is no less than a history of a Tswana tribe, the Batloung, that stretches from the terrible and bloody Matabele wars of the 1820s up to the late 1950s - but I did not know that when I first held the book in my hands. All I knew was that my grandfather was a missionary at Putfontein, where my mother was born, and that this little volume might tell me something about him that I could pass on to his great-grandchildren. Extracting that information from the book was not easy. My German is rusty, and the font in which the book was printed is the old German Gothic script, where the letter s looks like an f, and so on. Furthermore, the font was tiny. The book was not an easy read! I gave up trying, and put it down... but it stayed on my mind.

Eventually I hit on a plan: I scanned the whole book so that I could enlarge the pages on my PC, and slowly and laboriously I started translating it sentence by sentence. At first, I was anxious to get to the bit about my grandfather and was tempted to skip all the chapters that did not relate to him, but the unfolding story gripped me. The job took four months to complete. Towards the end, my German got so good that I hardly needed the dictionary. Now I had a book called Tlou! Tlou! The Elephant-Singers of Botshabelo. What to do with it? I sent copies to my daughters, my sister and some of my cousins, whose level of enthusiasm varied from none (cousins) to lukewarm (daughters) to "Publish it!" (myÂ sister). After not getting as much as even aÂ letterÂ ofÂ acknowledgementÂ from any of the scores of publishers I approached, I decided to self-publish it as anÂ eBook on smashwords.com - and that was a good idea!

Once the book existed, I started telling people about it. The missions departments of the South African universities all thanked me for copies. I found a facebook group called Ramatlabana, where many of the Batloung live today, on the Botswana border. They were re-settled there in 1977, when the South African government decided to clean up the "swart kol" called Putfontein in between Lichtenburg and Ventersdorp. IÂ recognized many ofÂ the surnames of the people in the Ramatlabana facebook group - those same surnames were in the book! After I published a link to the book on the group's page, I was contacted by one very enthusiastic reader, who said that I should present a copy of Tlou! to the king of the Batloung, Kgosi Gustav Gobusumang Shole. That sounded like a good idea to me, so I had a special luxury hardcover edition made for the purpose. In the front is a personal message to the BabinaTlou from the elderly and ailing author, Friedrich Dierks, who has always wished that his book could be made accessible to the people aboutÂ whomÂ it was written.

It was difficult to get hold of the king, but once I did (serendipitously - he just "happened" to be at a workshop at the same time as one of the many, many persons I contacted to ask how to find him got my email on her laptop!) he was eager to receive the book. He insisted that the ceremony take place on Putfontein farm, at the site of the original mission station. The farm was returned to the Batloung under the land restitution act. It is currently rather desolate, but plans are afoot to make itÂ bloomÂ again.

The Batloung people are anxious to learn about their history and heritage. Those of them who have read the book are glad that it came into their hands. I am glad that I was able to do them this service, and I was honoured and moved by the obvious pride that I saw when the king of the Batloung - whose name, Gustav, remembers my grandfather - held the book in his hands. 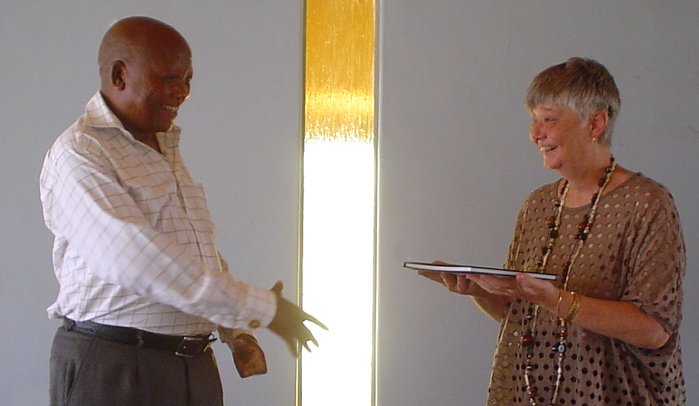