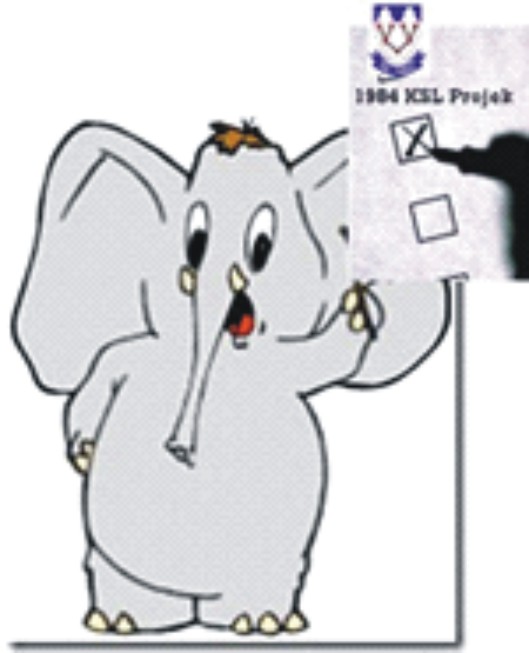 During a discussion at the 2009  Annual General Meeting of GSSA it became clear that the 1984 Voters Roll could provide an invaluable source of information for members of the GSSA. The transcribing of the 1984 Voters Roll was approved and became arguably, the largest project of the GSSA. It was appropriately named the Elephant Project – to be eaten bit by bit. The project was announced on the SAGen Mailing List. 72 Members of this list contributed close to R 30,000 for the photographing of the more than 171,000 images making op the 1984 Voters Roll. The aim was to make the contents of the Voters Roll available to members with the added extra, of an index of the maiden surnames of married women. Family Registers are often incomplete because married women are not listed alphabetically by maiden name on any voters roll.
The original plan was to use very specialized equipment at the GSU/LDS library but the equipment was only available for a few hours a week – it would therefore have taken a decade to produce the required number of digital images. Commercial Scanning equipment was tested both locally and overseas but that also did not provide image quality suitable for Optical Character Recognition. Several tests locally and by specialists overseas, made it clear that scanning would not provide quality sufficient for OCR – It was therefore decided to go the long route of photographing the images from a fiche reader and transcribing the images manually.
The initial photographing was completed soon enough – Under/over exposed photographs were replaced where necessary.

Apart from purchasing the DVD, members will also be able to purchase Data from the Web Shop
Volunteers do not necessarily have the time; They just have the heart.