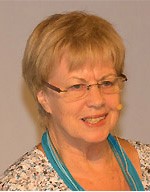 With her sub-title 'Old photos, letters and visits', Louna uses just this type of material to show her ancesters' footprints. She has been interested in genealogy from a young age.

Her grandparents David and Helena Boshoff were married in 1922 in Philippolis, where Louna's video takes viewers. Then on to Springfontein and later Jagersfontein where diamonds were mined. One of these is apparently in the British Crown Jewels. She shows the historic houses in Palmerston Street where David and Helena lived. There was a water pump where one had to deposit one penny to get water. Unfortunately, the old municipal offices dating from 1892 were burnt down by protesters.

In Fauresmith she remembers how they visited Grandpa and Grandma as children. Here the train drove into the main street; Louna shows historical photos in her video of the first time the train got in there. People are resplendant in their Sunday best. Today the station is deserted and overgrown with weeds.

Louna could also stand on the steps where her parents Johnnie and Lenie stood on their wedding day in 1946. She also visited the Anglo-Boer War monument at the cemetery; her Grandfather fought in that war. At the Phoenix coffee shop with its display of historical items, she finds out that someone in town will know where her ancestors lived. The house in Du Toit Street looks different today, but 54 years later she still recognises the veranda and a cement slab where the round dam once was.

Grandpa David was a water diviner in his day; Louna shows another photo of this. He also loved fishing under the Silver Bridge, which Louna later saw on the way to Koffiefontein; it's black now. He was buried in 1961 in Sasolburg.