Founded in 2004, eGGSA is the virtual branch of the Genealogical Society of South Africa, and provides a virtual home for everyone from the beginner to the most advanced family

To read more about us: click on the relevant links belows

Some of our Projects

To become a Member

Johan Diedericks has extracted from the data at National Archief at the Hague, 123 more of these VOC employees who settle at the Cape of Good Hope, and made them available onthe eGGSA web site. They have now joined those previously extracted by Lizette Svoboda, on the Stamouers.com section of our web site. Our thanks go to Johan and Lizette for making their hard work available.

VOC (Dutch East India Company) Accounts from Ships' Pay Ledgers, 1662-1805, contain information about many of its employees who settled at the Cape. Below are a number of excerpts from the online links to the Nationaal Archief (The Hague, Netherlands) web sites gahetNA and VOC - Opvarenden which seem likely to refer to those settlers. If you have any to add, please copy to a Word document and email them to the Stamouers editor.

The Nationaal Archief is making a huge effort to digitize the complete collection of the VOC and they hope to have it completed by 2017.

As of May 2016 almost all the Zeeland accounts have been digitized and put online, a large number of the Amsterdam ledgers are currently being scanned and should be available at the end of May or early June; the next batch is already planned.

For an introduction to these Ships' Accounts (soldijboeken) please see Corney Kellers' explanation on the Rekeningen uit de Scheepssoldijboeken 1662-1805 page.

Congratulations to Riana le Roux and her team of volunteers for this outstanding achievement. It is the product of many years of hard work, patience and dedication.

A big thank you to all of you going out to the cemeteries to take the photos, to those of you doing all the uploads onto the website, indexing the photos and cemeteries, maintaining our website. The project is extremely valuable to us and we appreciate your contributions.

The project is growing so fast that we are looking forward to the next milestone.

Sue Mackay has now completed her transcripts of extracts from the copies of the above newspaper preserved in the British National Archives at Kew - another mammoth transcription exercise completed by Sue!

Unfortuantely copies do not exist for years 1845 and 1846 in that repository but the rest 1840 to 1844 and 1847 to 1853 can be found in the Newspaper Collection along with the many other extracts from South African newspapers old and new done by many different volunteers and collected here by Sue.

In the Netherlands National Archives (Nationaal Archief, Den Haag) is a class of records know as the Ingekomen Stukken from the Cape of Good Hope. Each year the administration at the Cape sent a bundle of letters and reports to the Central Administration in the Netherlands, presumably with the return fleet. Each of these bundles of documents was accompanied by an inventory of the documents included.

Corney Keller has copied and read through, in microfilm format, all the Inventories from 1655 to 1683. Many, if not most of these state that their bundles contain 'Lijste van alle de vrijeluijden ... ' but only two have been found to still contain their lists, that of 1672-73 and 1678-79. These two confirm that these are certainly what were transcribed as the VC Muster Rolls - since there are transcripts for many more years the originals seem to have disappeared from the Hague Archives in the meantime - at all events they are not to be found in the microfilmed versions.

In addition the 1681-82 bundle of documents contains a Vrijboek, list of Freeburgers and their financial transactions with the VOC, also now available on the web site - Den Haag Lists of Freeburgers. 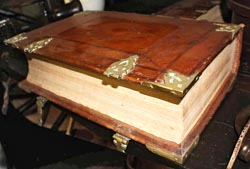 Photographs of 53 Bibles containing family information from the collection of the Voortrekker/Msunduzi Museum, Pietermaritzburg have been added to the Bible collection: Find them here. These were photographed and contributed by John Deare of the Natal Midland Branch of the GSSA.

All have been carefully captioned and indexed by Hobbie Stoffberg

Marcia Bezuidenhout from Australia is in the process of transcribing the list of Tulbagh district deaths included in the Tulbagh NGK church registers. These include deaths from 1744 to 1793 and then from 1816 to 1848. So far she has completed 1744 to 1775 and these have been added to the searchable database on the eGGSA web site: Burial, Cremation and Death Registers