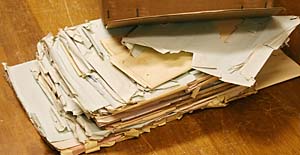 A number of records have been added to the Passenger list database.

New to the database are the lists in the Cape Archives IBC 6 series, passenger lists of emigrant ships 1858 to 1861 - twenty ships carrying 5000 or so passengers, transcribed by Richard Wolfaardt and his international team of transcribers,

and also around 42,000 passenger from the lists of departures and arrivals found in The Colonies & India (a weekly newspaper) April 1883 to December 1888, transcribed by Trisha McLeod.